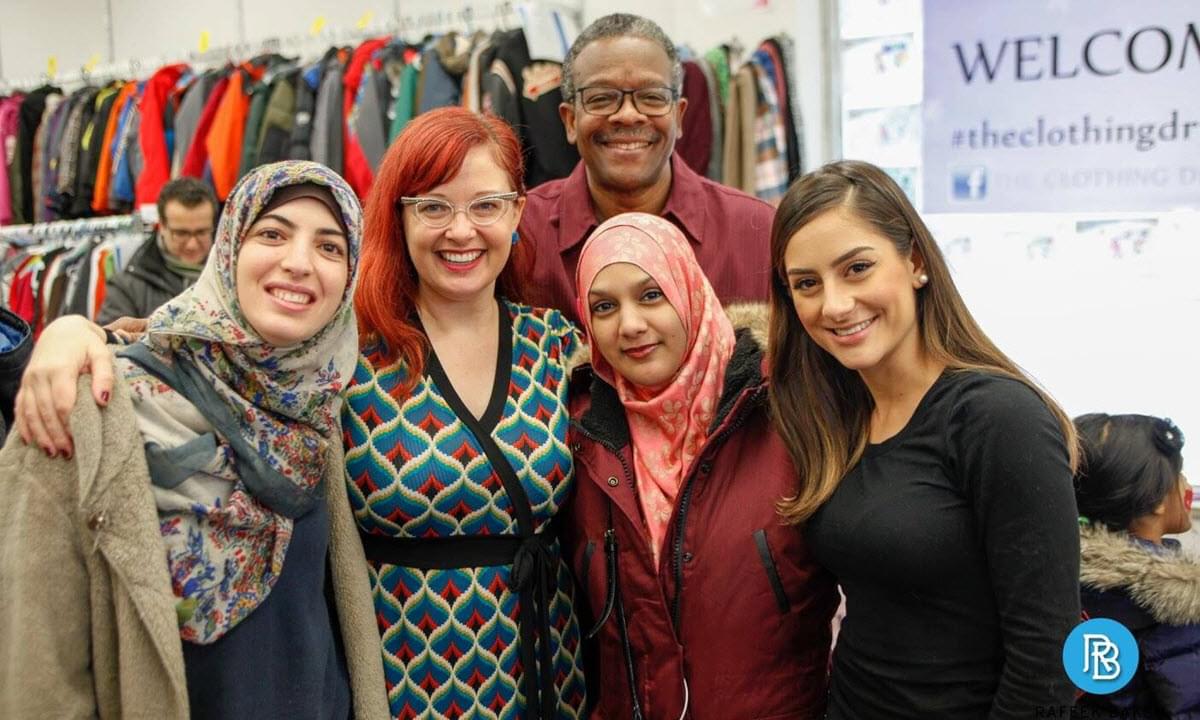 As the owner of Queen Street West’s hip Fresh Collective clothing store, Bernhardson knew a lot of people in the apparel industry and she figured she could easily get her hands on a few bags of gently-used clothes by putting a post on Facebook.

“I thought maybe I’d collect 10 bags of clothing, I’d pick out the ones that I thought were suitable for our family and the right size, and that would be the end of it,” she says.

Little did she know this “easy job” would explode into a massive initiative involving hundreds of volunteers and benefitting thousands of people – an endeavour that would forever change how Bernhardson gives back to her community.

It all started with that first appeal for clothes on Facebook. Her post was shared thousands of times and within two days, hundreds of bags had been brought down to her retail shop – a tsunami of generosity and literally, mountains of clothing.

Overwhelmed by the reaction, Bernhardson put out a call for volunteers. She needed people to sort and match clothes with families in need.

Hundreds turned out to help – people from all walks of life. “It was incredible, incredible team effort,” says the 46-year-old mother of two children.

Eventually, as the basement of Fresh Collective began filling up with clothes, more space was needed. A call went out, and someone donated retail space for a pop up store in the east end. Volunteers staffed the store. Others coordinated things like media coverage.

Bernhardson’s refugee clothing drive project, which she dubbed The Clothing Drive, was taking on a life of its own. The storefront stayed open for six months and served thousands of refugees who came to shop with dignity for the clothes they needed.

“There were days when 250 people would get bused in (to shop.) By the end, we had hundreds of volunteers and thousands of people who benefited. There were counts initially but we lost count at 3,000,” says Bernhardson.

Bernhardston, whose first foray into entrepreneurship was a 90s sweater business (she was dubbed Toronto’s knitting queen), learned the business of fashion by trial and error, developing the skills that helped immensely with The Clothing Drive.

“For me, it was just an incredible experience of, in some ways, just stepping out of the way and then doing what was needed. It would have been hard to stop the momentum of it even if I tried,” she says.

The message Bernhardson wants to impart from her experience with the project is that anyone can make this sort of magic happen.

“I’d like people to know that it doesn’t take anybody special, who is any smarter or less busy,” she says. “It is ordinary people showing up and doing what needs to be done. That’s what can make miracles happen and save lives, and make the world a better place.”

Bernhardson has new projects on the go – she’s fundraising for two other Syrian families, including a family in a Lebanese refugee camp. The mother contacted several Canadians on Facebook, including Bernhardson, bringing together this group of complete strangers who didn’t realize until they met that no one actually had any personal connection with the mother or family.

“We thought: ‘That’s so resourceful – we have to help her.’ She has four kids and a husband who had a stroke,” says Bernhardson, who is also helping with the paperwork to bring the family to Canada.

Born and raised in Saskatoon, Bernhardson has no ties to Syria or the Middle East. Like so many Canadians, she was just moved to help by the heart-wrenching news stories. The Clothing Drive, and the way people poured out to help, “has changed forever how I give back,” she says.

“There was lots of learning about people and different cultures. I learned how amazing people are at the core of their being. People are awesome and want to do good.

“To see that many people come together to work on a cause was one of the most amazing experiences of my life.”

This article originally appeared in the Globe & Mail in October 2016. Photo courtesy of Rafeek Baksh.