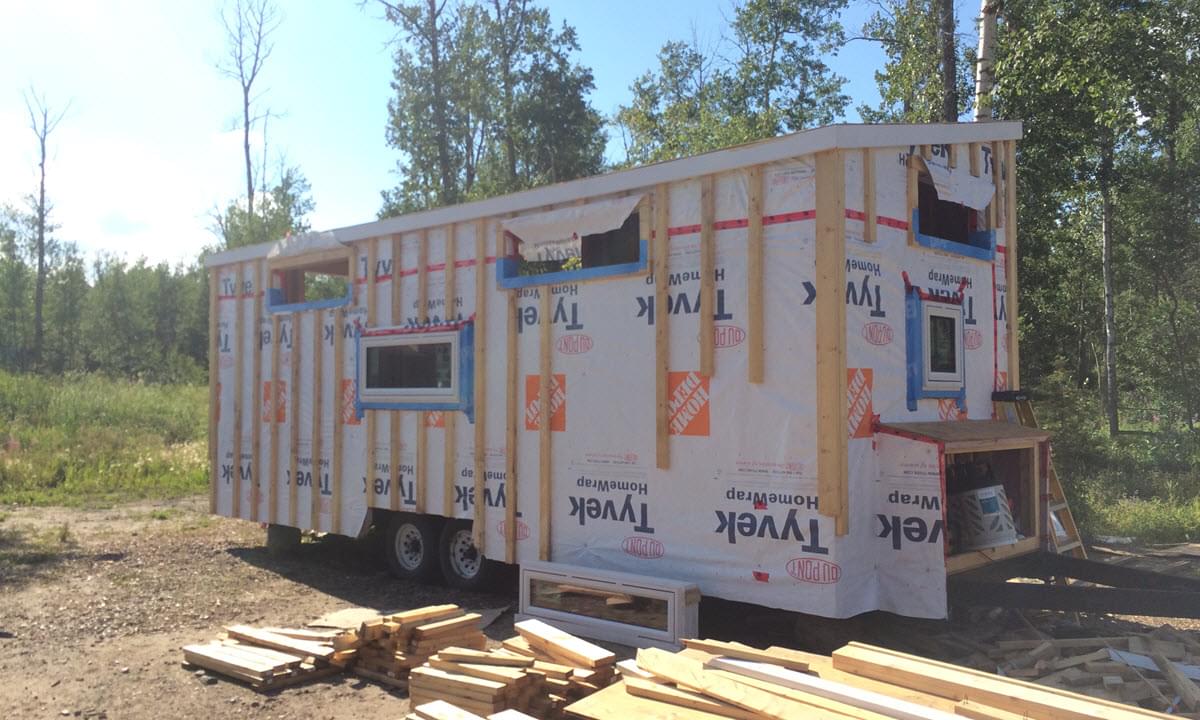 Some people would say Kenton Zerbin has boxed himself in with the way he lives, but he will tell you the opposite.

Zerbin and his wife Melissa are building a tiny house in Edmonton. The house is just 10.9 metres long and 3 metres wide.

It’s about the size of a roomy storage shed, but instead of lawnmowers and snowblowers, it’s filled with “two bodies and a cat,” as Zerbin puts it. When completed, the house will be parked just north of St. Albert, a “bedroom community” of Edmonton located on the northwest border of the city.

“We were tempted to go a bit smaller, so we wouldn’t need a building permit. But we decided our size is okay.”

Zerbin’s cozy quarters are the result of an epiphany he had while he was studying and then travelling the world.

“I started my career in teaching. During my courses, I wondered, ‘Why are we teaching what we’re teaching?’ We’re just pumping kids out of school, putting them into typical jobs, and meanwhile the world’s problems just seemed to grow,” he says.

Zerbin decided to become a change agent by studying permaculture — designing systems, whether for agriculture or the built environment, which are more in harmony with nature than conventional designs and are ecologically sound and sustainable.

In two years of world travel, “I worked on building all kinds of houses,” he says. He helped build Earthships, a sustainable design developed by legendary renegade architect Michael Reynolds in New Mexico.

“I also built yurts and straw houses — then I came to tiny houses,” says Zerbin. The experience opened his eyes to the benefits of the small. “There are other ideas besides the conventional housing model. I asked myself, ‘Why am I not in one of these tiny houses?'”

Settling back in Edmonton as a teacher of permaculture who runs his own business, Zerbin planned and started to build his tiny house.

“In between I met someone [Melissa] and we got married,” he says. “She wouldn’t let me talk about the tiny house while we were planning the wedding. But she was in.” (Melissa even writes a blog called “Edmontiny” about their adventures in construction.)

Building and living in a tiny house is not simply a matter of slapping up some walls and a roof, especially in a forbidding climate like Edmonton’s, says Zerbin.

“As a teacher, I talk about efficiency. What does it mean to be housed, even in an intemperate climate? What do you need?”

In Zerbin’s case, it means insulating with R34 insulation, which is much more robust than the standard used in conventional Canadian housing. There is additional insulation on both the outside and the inside. “It’s airtight — it’s unlikely we’re going to need much heating, even in Edmonton,” he says. 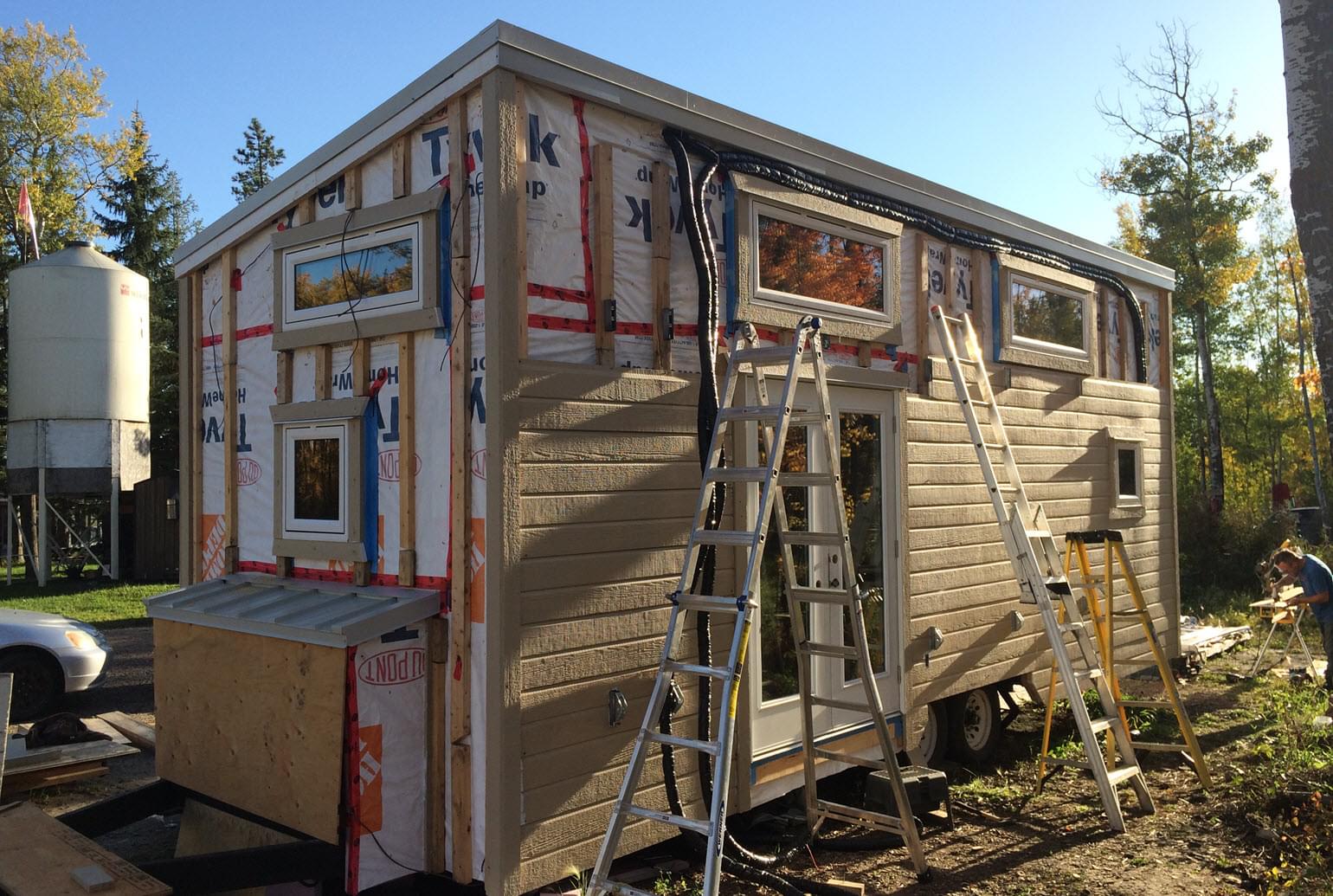 The floor plan consists of a main floor with a C-shaped kitchen — “we call it the breakfast bar” — an area with a couch and a sliding, latticed door that conceals the bathroom.

“Above the bathroom there’s a small loft, which we call the rest loft. That’s where we lounge and watch TV or entertain guests. There’s another loft above the kitchen, and that will be our bedroom.

In the bathroom there is a composting toilet. The water will be heated by solar power and there are 10 solar panels “to meet all our energy needs,” says Zerbin. The house has the capacity to either be on Edmonton’s electrical grid or off.

The plumbing and water heating system are both a bit complicated; the house has more than 2,000 litres of water storage, including some of it cached in a tank under the main floor sofa. The benefit is that the system’s ecological footprint is minimal. Similar to the electrical system, it’s designed so the house can either be connected to municipal water or to a well.

Zerbin thinks that not only is a tiny house more efficient than a big one, it’s also a way to promote a positive, healthy lifestyle. Through his business, he teaches others how to embrace earth-friendly living with workshops on gardening, composting, planting trees, raising chickens and of course, tiny house-building.

Zerbin’s also a proponent of getting rid of the clutter. “We have way too much stuff,” he adds. “In our consumer culture I realize it’s kind of abrupt for many people to downsize, but we have been doing it for a year and a half.”

Even in a small space though, there’s room for growth. “We’ve talked about having a child,” he says. Perhaps it will someday be a tiny house for three.