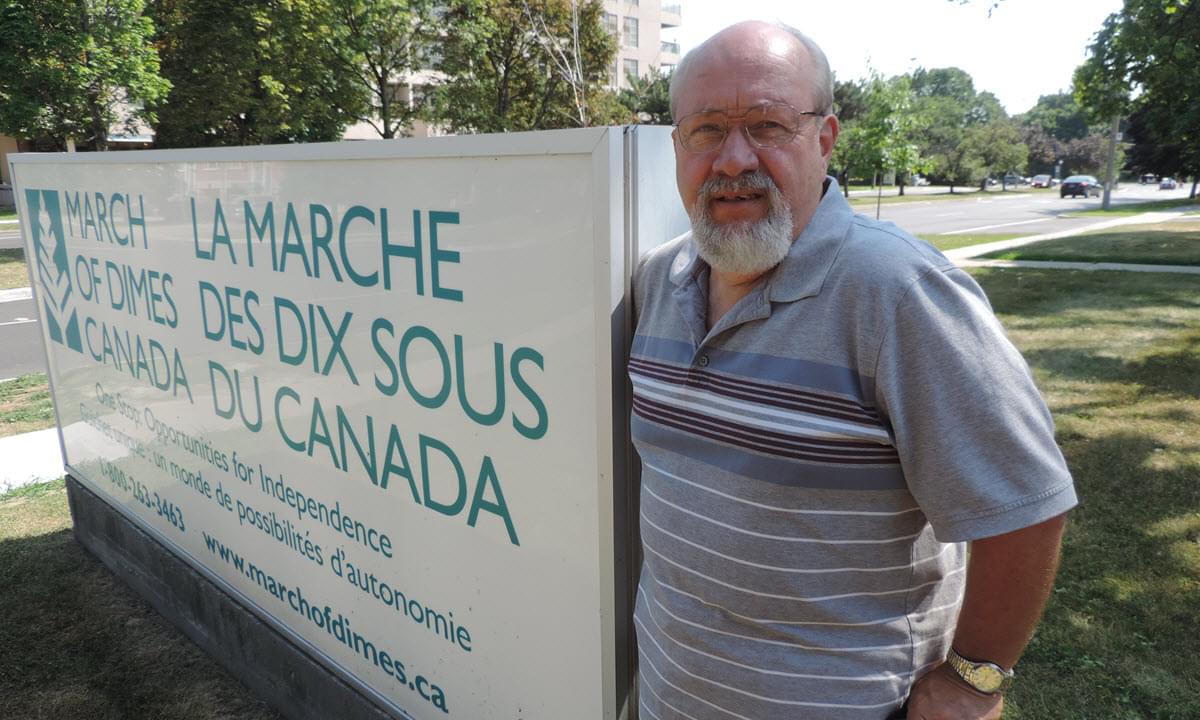 Tom Rideout’s first stroke hit him in the middle of a workday conversation. The 46-year-old shop foreman was mid-sentence with one of his employees when he felt the onset of a severe headache and lost consciousness. He woke up 28 days later in a Toronto hospital.

The second stroke hit less than a year later, in 2004, while the father of three was still undergoing rehabilitation. During surgery, doctors discovered a 15 mm aneurysm on the side of his brain. With no family history of either condition, Rideout struggled to pinpoint what had triggered these two life-changing events.

“They called me a workaholic. I always enjoyed working, I enjoyed my beer,” he says now. “I never took drugs, but I worked and worked and I guess the stress caught up with me.”

Recovery was long and difficult as Rideout pushed to regain mobility on the right side of his body and recover full speech. The physical rehabilitation would prove the easier part — two years in, Rideout slipped into a deep depression that resulted in frequent outbursts and a suicide attempt that ultimately ended his marriage.

Removed from home, Rideout leaned on family both in Ontario and in his native Newfoundland to help him back on his feet. Assistance from peer groups like Stroke Recovery Canada, a national service through the March of Dimes, gave him an additional boost and broadened Rideout’s access to the rest of the world.

In 2015, the organization began testing a hands-free assistive technology for people who have trouble typing, moving a mouse, or reading a screen on a computer. Created and distributed by Toronto-based eSSENTIAL Accessibility Inc., the program allows people to control their mouse through head or eye gestures via webcam. The company also partners with brands so that people with disabilities know they can easily navigate the brand’s website for online shopping, services and delivery.

Rideout volunteered to be part of a trial group that gave the software a test drive and the impact on his life was profound.

Though he’d used technology before his strokes, Rideout embraced the challenge of completely re-learning how to use a computer. “It’s an ideal program they’ve invented. It surprised me,” he says, noting that because the system picks up subtle eye and head movements, it allows him to stay online for much longer stretches of time. “Sometimes you get tired and don’t want to use your arms.”

Now from his home in Fonthill, Ont., a small residential town in the southern Niagara Region, Rideout can order clothing and furniture through the Sears website, coordinate his Wheel Trans schedule, and arrange for pizza and Chinese food delivery — his favourites — all with a few practiced movements of the eyes.

He’s even starting to experiment with variety. Thanks to online research, Rideout recently discovered a new food delivery service called Heart to Home that provides what he considers “home-cooked meals,” a vast improvement from the “bland” meals he was getting from a previous delivery service. And for this year’s Christmas shopping, Rideout says he’s thrilled with the options he’s found on the Costco and Giant Tiger websites now that they deliver to his area.

Numerous organizations around Canada, like Cineplex and the City of Vaughan, are taking the lead on integrating this type of assistive software into their accessibility initiatives. The technology, combined with massive growth in the online goods and services marketplace, has made it possible for the disabled to get everything from vital services to luxuries without ever having to leave the house.

Beyond the necessities, like groceries and banking, anyone can now outsource tasks like laundry, dog walking or crowd-sourced home repair. For example, Rideout’s been comparing prices across various sites to bring in a home-cleaning service and eventually wants to find a gardener to help tend his yard.

But it’s the sense of autonomy that has ultimately provided the greatest life change, according to City of Vaughan accessibility co-ordinator Warren Rupnarain.

“It allows the [disabled] to access information independently, and that’s the key word,” says Rupnarain, who himself requires a wheelchair to get around.

“In terms of their quality of life, it’s a huge increase. They can do the majority of their everyday functions of life. It’s really groundbreaking.”