How the Non-Profit B.L.A.C.K. Supports Young Artists in Canada 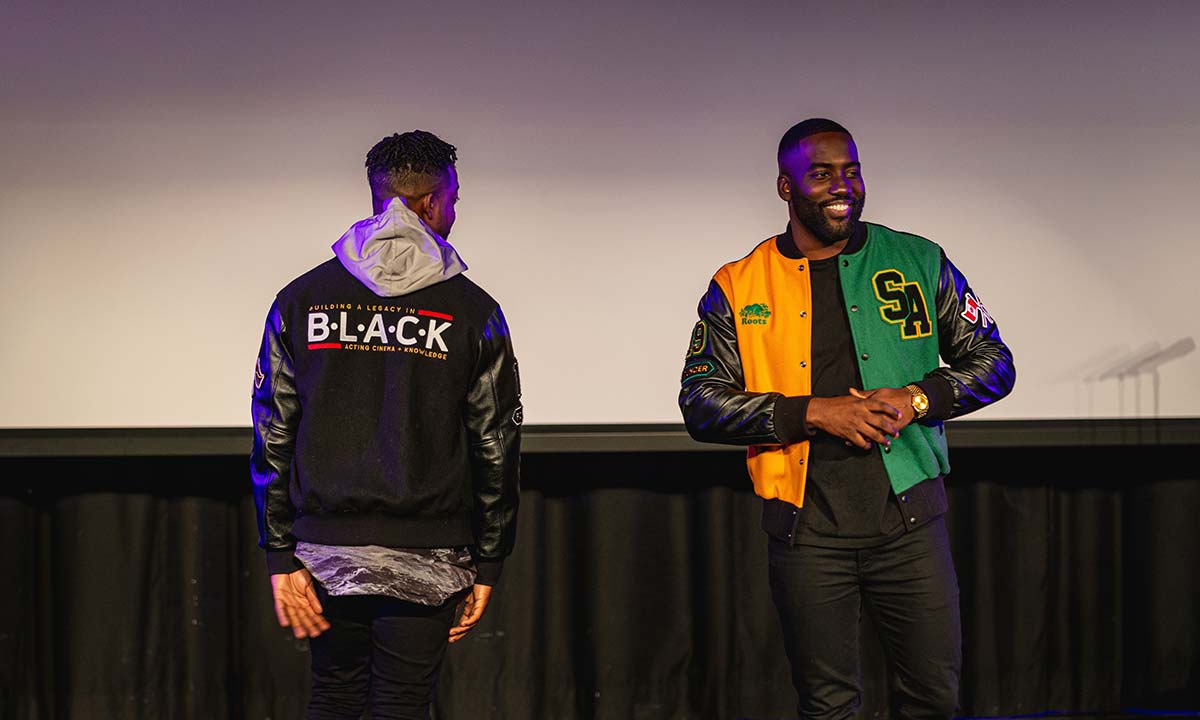 Scarborough-born brothers Stephan James and Shamier Anderson knew from a young age they wanted to pursue acting and cinema. But early in their careers, they were struck by the unfortunate lack of mentorship and support from their peers.

To overcome this challenge, they started Building a Legacy in Acting Cinema and Knowledge (B.L.A.C.K.). B.L.A.C.K. is a not-for-profit striving to create more opportunities for young, diverse artists in Canada. Their recent youth initiative was to host a monologue poetry slam competition for high school students in Scarborough.

Listen to this podcast about how the brothers are helping build a community and change youth lives through the arts.

The idea to build and support a community of young, diverse talent in Canadian film and television began with two brothers.

Hey, what’s going on this is Stephan James and I am the co founder of BLACK

My name is Shamier Anderson, co founder of BLACK

Stephan and Shamier, both born and raised in Scarborough, Ontario knew from a young age that they wanted to pursue acting and cinema. But in the early stages of their careers, they found an unfortunate lack of mentorship and support from their peers. Forced to overcome this adversity, the brothers saw an opportunity.

This was an idea that kind of came from feeling like outsiders as Canadian talent trying to make an impact in their own city, you know, and who happened to be black. So Stephan and I came up with this thing of, you know, why don’t we just have a party? Why don’t we start something where we can all be in a space with all of our friends, peers, you know, performers of colour.

Five years later, the idea grew. The brothers started BLACK – an acronym that stands for Building A Legacy in Acting Cinema and Knowledge, to develop initiatives to get more young Canadians into the industry, regardless of background or circumstance.

One of these initiatives is a monologue poetry slam competition. As a proud supporter of this event, RBC is committed to empowering young voices in a unique and impactful way. We support the BLACK not-for-profit to help artists take meaningful steps towards success.

Stephan and Shamier told us more about how they’re building a community and changing lives through the arts.

The poetry slam is an event that takes place in which students from all cultural backgrounds are able to perform spoken word poetry for a chance at various prizes.

I think the poetry slam is an effective way to reach youth and get their voices heard because it gives students the opportunity to share, express, heal in a fun and creative way.

But for many young people, especially those that come from marginalized communities, the financial costs of pursuing the arts can be a major barrier.

So we want to be able to give them the opportunity to just show up and show up and just be able to perform at no cost. To be able to act at no cost, dance at no cost, just be themselves at no cost. Because acting lessons, headshots, classes, those types of things cost money, and Stephan and I growing up, we never had any money and a lot of the things that we wanted to do, we couldn’t do because of money. And we never want that to be a restriction for people that want to pursue their dreams.

That’s why BLACK takes a grassroots approach in its support, to ensure that talent is the only thing young people need to get ahead.

So, the thing that we really pride ourselves on is just making sure all you gotta do is show up and we’ll provide the resources which means you know, artists, composers, choreographers, agents, managers to be in a space to give you advice, mentorship and guidance … conferences and summits and panels and all those things are great. They’re all informative, but how could young people have tangible walkaways to be able to really have something, take something and be able to apply it to themselves and get to the next step?

The monologue poetry slam competition brought together students from 10 highschools in Scarborough to participate in a workshop where they were provided with examples and resources to help them develop their piece.

We’ve seen kids talk about a wide range of things, including, you know, their family life, their sexuality, everyday struggles in school … The response has been overwhelming. I think the students are encouraged by watching their peers get on stage and bare it all whether it’s comedic or sentimental. I think that the students display not only talent but bravery.

One of those students is Jhon Amini from Wexford Collegiate School of the Arts.

Jhon is one of 13 semi-finalists that RBC and BLACK co-hosted at a Toronto Raptors game as part of the celebration. In the final competition, each finalist will perform in front of a panel of expert judges including Stephan and Shamier for a chance to win cash prizes, a full-ride scholarship, mentorship programs and more.

I think Canadians should really listen to what these young artists need to say. Because they all have amazing messages behind them. And they have a lot to say about issues in society. And it’s coming from teenagers…

Stephan says part of their organization’s mission with this competition, and as a movement as a whole, is to celebrate past, present and future artists.

I think it’s literally in our name, building a legacy between acting cinema and knowledge, acknowledging and celebrating incredible artists of color who have made waves in Canada and all over the world. By never forgetting their legacy, we are able to build upon it and hopefully inspire a whole new generation.

RBC is proud to support young Canadians in the arts. We believe in creating space for artists to speak for themselves and about themselves in new and exciting ways.

To learn more about BLACK and for updates on the final competition, visit their website at theannualblackball.com.

MUSIC FADE UP AND OUT