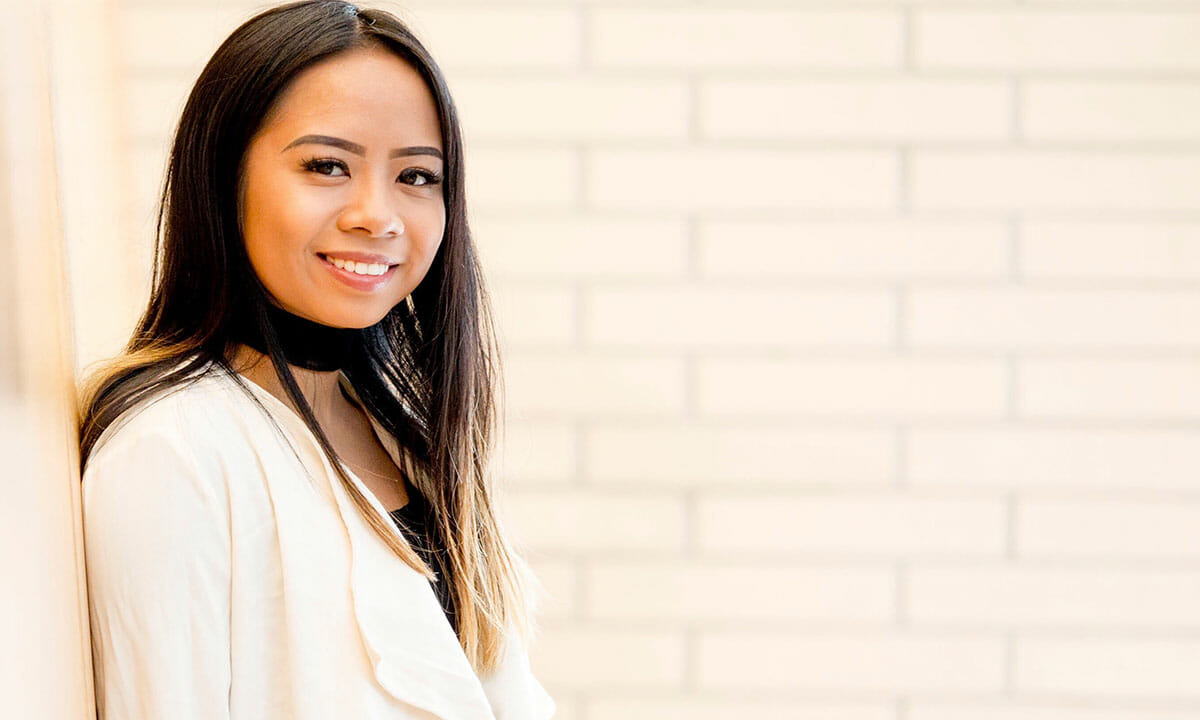 Open share menuClose share menu
Loizza Aquino has been compelled to making a difference since she was 9 years old. She first led a fundraising effort to help typhoon victims in her home country of the Philippines while in the 4th Grade. But her social activism began to really take shape at age 15, when she lost a friend to suicide.
Loizza Aquino started to focus on mental health advocacy when she was in grade 10, after losing one of her best friends to suicide. Her friend was one of four students in Winnipeg to die by suicide within a one-month period.

“I was so confused. I was in shock, and wanted to know why this was happening,” she says. After spending countless hours searching for answers, she realized that understanding “why” wasn’t going to make enough of a difference. Instead, she wanted to focus on the issue of mental health, the stigma surrounding it, and the critical problem of suicide. A late-night tweet saying, “I want to have a mental health group. Does anyone want to help me?” generated dozens of likes. This was enough to spur Aquino into action and she created her own youth-led non-profit organization: Peace of Mind.

Her organization holds events called Youth Against Mental Health and Illness Stigma (YAMHIS), which provide a platform for students to share their stories and struggles with mental illness. Since 2015, YAHMIS has reached more than 2,000 students, including an event last year attended by over 700 Manitoba youth.

Aquino was recently recognized as a winner in the annual RBC Top 25 Canadian Immigrant Awards — an award that celebrates the outstanding accomplishments made by Canadian newcomers. She also won an additional distinction as the winner of the Youth Award recognizing the achievements of young immigrants who make a difference in their adopted country, and show great potential as long-term nation-builders.

What Challenges Do You See Newcomers Facing?

Newcomers face a number of challenges when they move to a new country. The language barrier is a big one. And in the Philippines, my mom was a pharmacist, but her credentials didn’t carry over. My parents had to work two jobs, sometimes overnight, so coordinating schedules was a big challenge — as soon as my mom came home from work, my dad would leave. Spending time together as a family wasn’t a luxury we could afford when we had to make ends meet. 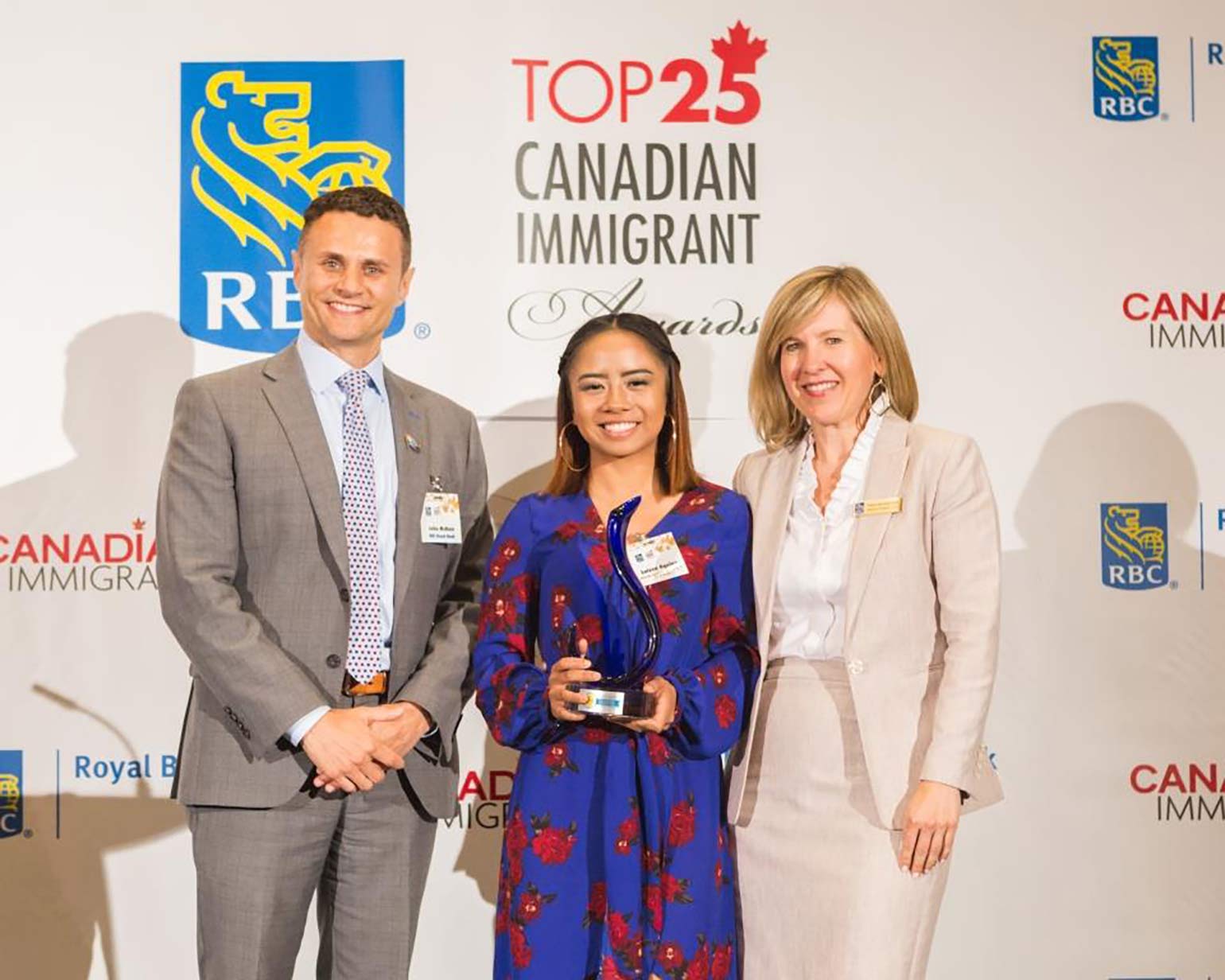 What’s the Best Advice You Received to Overcome These Challenges?

The best advice I received was something my parents told me — and have been telling me ever since I could remember — and that is: Never forget where you came from.

Whether you’re successful or you fail, know where your roots are. The wonderful thing is that Canada is so welcoming. We welcome diversity, differences in people and different cultures, so you don’t need to leave yourself behind.

That’s part of what motivated me to lead a fundraising project when the typhoon hit my hometown. I was only 9, but I knew that if my parents hadn’t come to Canada, that I could have been one of those children trying to get to school through flood conditions without clean water to drink. Giving back helped me connect to where I came from and I knew even the smallest actions could mean so much.

What Does Being Canadian Mean to You?

To me, being Canadian means being altruistic — caring about the people around you, being willing to give when someone needs a hand. In Canada, we care about each other, our quality of living, and we put actions behind our words. We don’t wait for things to happen. As a welcoming country, we welcome every bit of the people who come, including their past lives and experiences. We don’t ask someone to leave who they are at the door.

What Motivated You to Expand Peace of Mind?

We have been making a great impact in Manitoba. 700 students came out to one event last year, and after the speakers finished, we held an open mic session where anyone could come and talk. The line up was so long — people shared stories of their social groups, families, sexual assault, depression, lack of care, suicide attempts. These people feel safe in our events, and they feel stronger afterwards.

People have come up to me and said, “I never told anyone that story. I feel so great now.” People have even told me that an event saved their life, or helped someone they love get help. When I know I can help prevent people from harming themselves, and can seek the help they need, it motivates me to do more. We held our first event in Toronto in March, and we are looking to expand to all three University of Toronto campuses in October.

What’s Next for You?

I am entering my second year at University of Toronto, where I am doing a double major in Mental Health Studies and International Development Studies, with a minor in Public Policy and Governance. So that will keep me busy! But I am also planning to expand Peace of Mind to Ottawa, Waterloo, then Quebec. I’m holding a fundraiser in the fall to raise money and awareness.

Starting a new life in Canada can be hard if you’re unfamiliar with the culture, but at age 18, Aquino already has a track record of making a difference in her adopted country. By founding Peace of Mind, she’s managed to empower other Canadian youths and provide a platform for communities to talk openly about mental health issues.

Learn how RBC can help newcomers settle in faster.